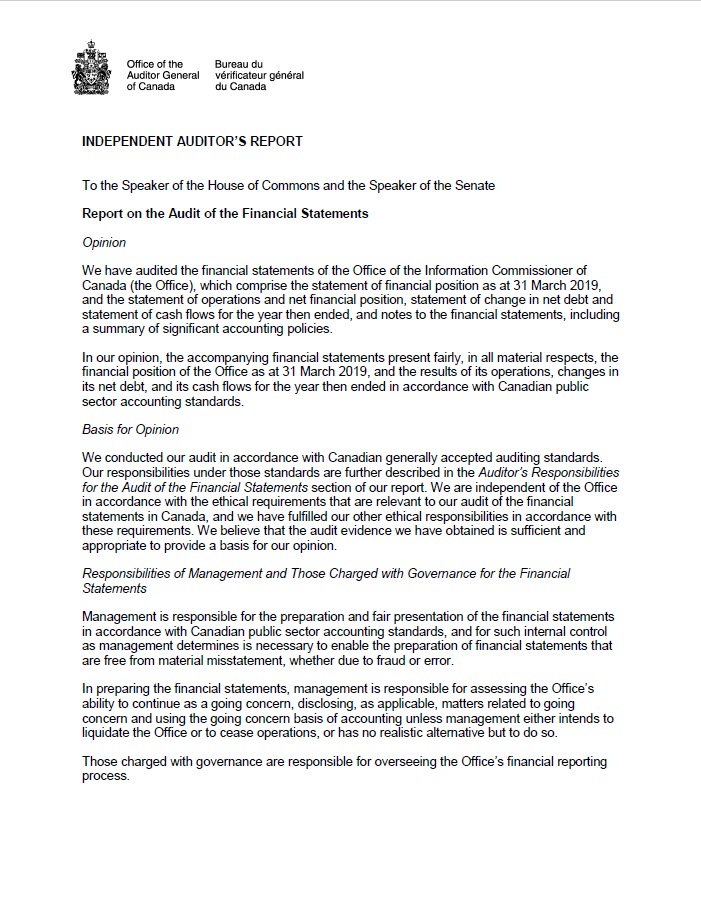 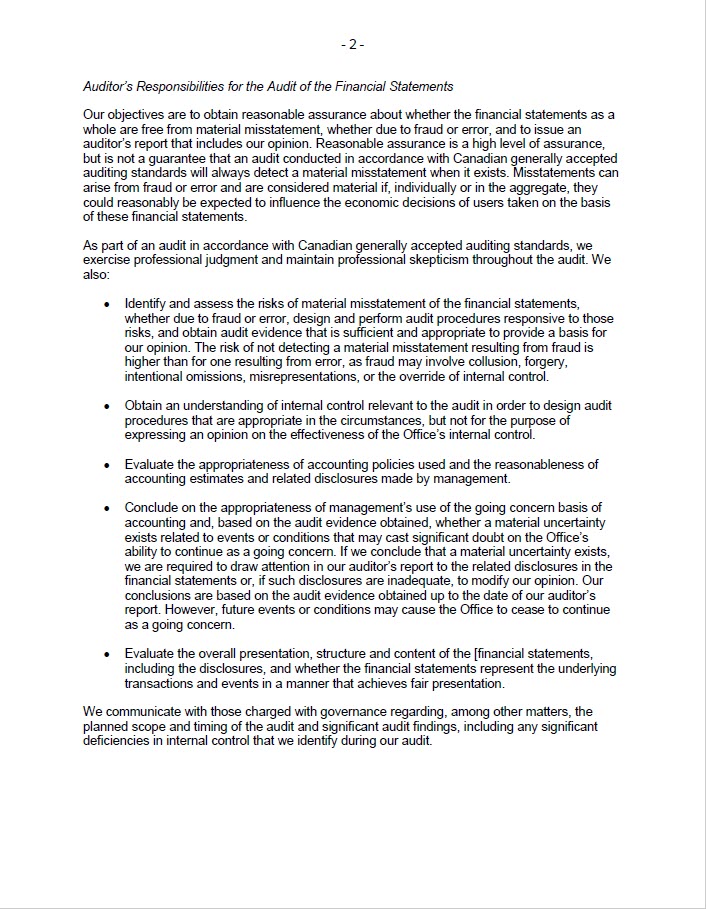 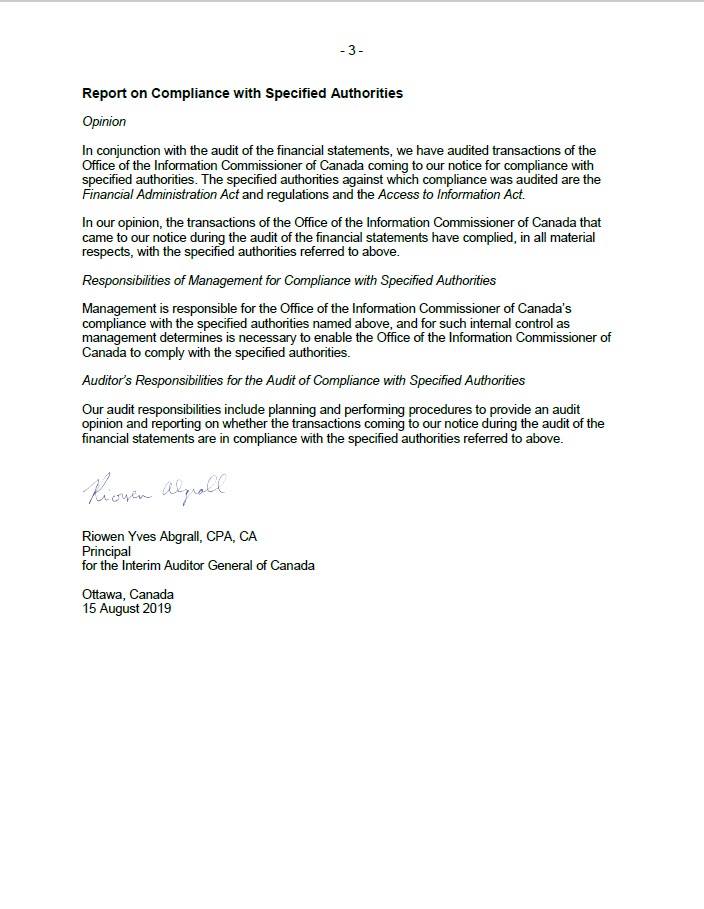 Responsibility for the integrity and objectivity of the accompanying financial statements for the year ended March 31, 2019 and all information contained in these statements rests with the management of the Office of the Information Commissioner of Canada (the "Office”). These financial statements have been prepared by management using the Government's accounting policies, which are based on Canadian public sector accounting standards.

A risk-based assessment of the system of ICFR for the year ended March 31, 2019 was completed in accordance with the Treasury Board Policy on Financial Management and the results and action plans are summarized in the annex.

The Office of the Information Commissioner of Canada (the Office) was created under the Access to Information Act , which came into force on July 1, 1983. The Office is listed under Schedule I.1 of the Financial Administration Act and is funded through annual appropriations. The Information Commissioner is an independent Agent of Parliament appointed by the Governor-in-Council following approval of the appointment by resolution of the Senate and the House of Commons. The Commissioner is accountable to Parliament for the results achieved by the Office.

(a) Pension benefits
The Office's employees participate in the public service pension plan (the “Plan”), which is sponsored and administered by the Government of Canada. Pension benefits accrue up to a maximum period of 35 years at a rate of 2 % per year of pensionable service, times the average of the best five consecutive years of earnings. The benefits are integrated with Canada/Québec Pension Plan benefits and they are indexed to inflation.

Both the employees and the Office contribute to the cost of the Plan. Due to the amendment of the Public Service Superannuation Act following the implementation of provisions related to Economic Action Plan 2012 , employee contributors have been divided into two groups – Group 1 relates to existing plan members as of December 31, 2012 and Group 2 relates to members joining the Plan as of January 1, 2013. Each group has a distinct contribution rate.

The Office’s responsibility with regard to the Plan is limited to its contributions. Actuarial surpluses or deficiencies are recognized in the Consildated Financial Statements of the Government of Canada, as the Plan’s sponsor.

As part of collective agreement negotiations with certain employee groups, and changes to conditions of employment for executives and certain non- represented employees, the accumulation of severance benefits under the employee severance pay program ceased for these employees commencing in 2012. Employees subject to these changes have been given the option to be immediately paid the full or partial value of benefits earned to date or collect the full or remaining value of benefits on termination from the public service. These changes have been reflected in the calculation of the outstanding severance benefit obligation.

The Acquisition of tangible capital assets and the increase in accounts payables and accrued liabilities presented in the Statement of Cash Flows excludes an amount of $223,701 ($512,130 in 2017-2018) in relation to the acquisition of tangible capital assets, as the amount relates to capital investing activities in 2018-2019 that remain to be paid as at March 31, 2019. It includes an amount of $512,130 for capital investing activities not yet paid for at the end of the prior year.

The nature of the Office’s activities may result in some multi-year contracts and obligations whereby the Office will be obligated to make future payments when the services/goods are received. Contractual obligations, related to accomodation and rental of informatics equipement, that can be reasonably estimated are summarized as follows:

On 12 June 2019, an agreement between the Government of Canada and 15 of its public service unions was signed to compensate current and former government employees for damages associated with the Phoenix payroll system. The provisions of this agreement will also be extended to excluded employees from the 15 public service unions, as well as unrepresented government employees and executives. Compensation for fiscal years 2016-17 to 2018-19 includes up to 4 days of leave credits. Those credits are expected to be added to employees’ leave banks in 2019-20. The Office estimates these additional leave credits at approximately $ 58,735.