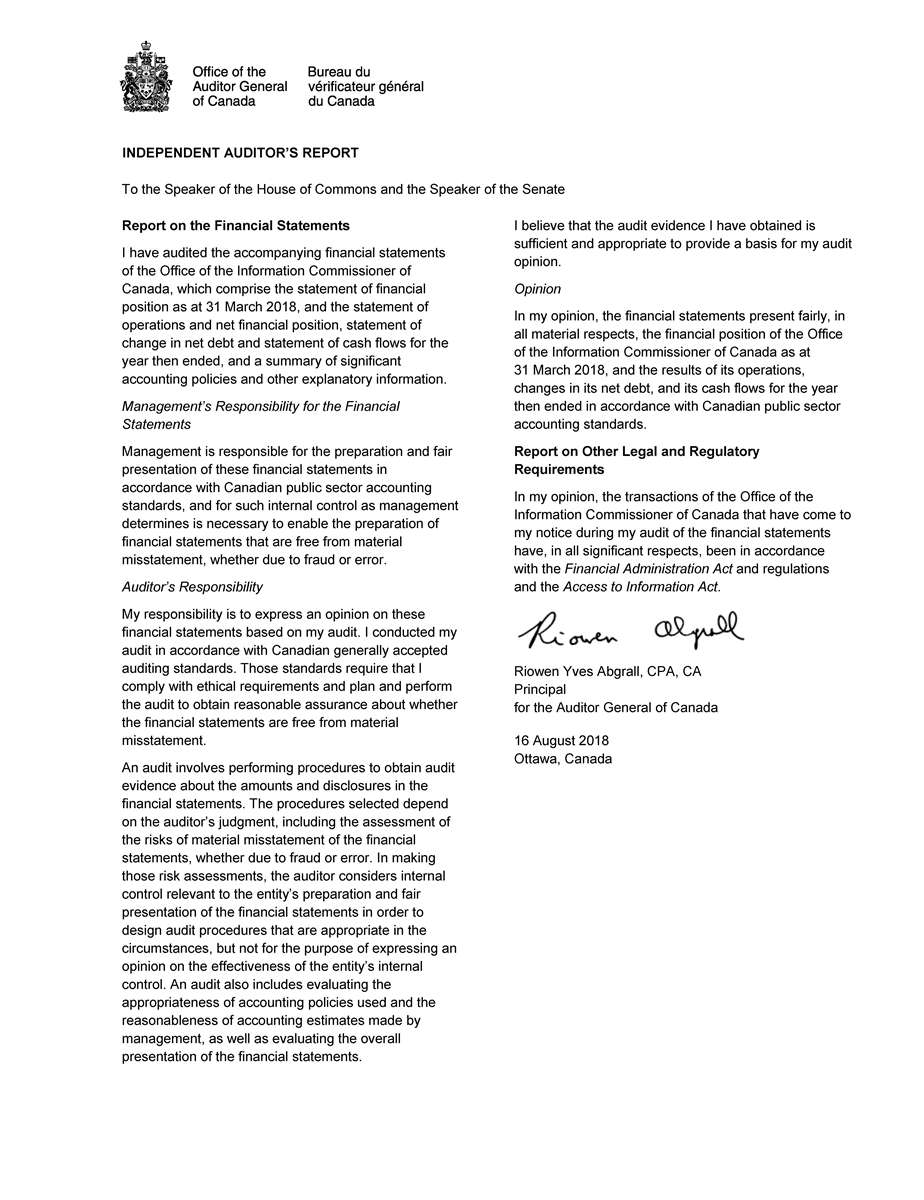 Responsibility for the integrity and objectivity of the accompanying financial statements for the year ended March 31, 2018 and all information contained in these statements rests with the management of the Office of the Information Commissioner of Canada (the "Office”). These financial statements have been prepared by management using the Government's accounting policies, which are based on Canadian public sector accounting standards.

A risk-based assessment of the system of ICFR for the year ended March 31, 2018 was completed in accordance with the Treasury Board Policy on Financial Management and the results and action plans are summarized in the annex.

Compliance with access to information obligations: The Access to Information Act is the legislative authority for the oversight activities of the Information Commissioner which are: to investigate complaints from requestors; to review the performance of government institutions; to report the results of investigations/reviews and recommendations to complainants, government institutions, and Parliament; to pursue judicial enforcement; and to provide advice to Parliament on access to information matters. The Office supports the Commissioner in carrying out these activities.

The Office adopted the new Public Sector Accounting Standards (PSAS) PS 2200 for Related Party Disclosures and PS 3420 for Inter-entity Transactions effective April 1, 2017. The adoption of these standards did not result in changes to the financial statements other than additional disclosure under the accounting policies for expenses.

The Office's employees participate in the public service pension plan (the “Plan”), which is sponsored and administered by the Government of Canada. Pension benefits accrue up to a maximum period of 35 years at a rate of 2 % per year of pensionable service, times the average of the best five consecutive years of earnings. The benefits are integrated with Canada/Québec Pension Plan benefits and they are indexed to inflation.

The Office’s responsibility with regard to the Plan is limited to its contributions. Actuarial surpluses or deficiencies are recognized in the Consildated Financial Statements of the Government of Canada, as the Plan’s sponsor.

The Acquisition of tangible capital assets and the increase in accounts payables and accrued liabilities presented in the Statement of Cash Flows excludes an amount of $512,130 ($124,795 in 2016-2017) in relation to the acquisition of tangible capital assets, as the amount relates to capital investing activities in 2017-2018 that remain to be paid as at March 31, 2018. It includes an amount of $124,795 for capital investing activities not yet paid for at the end of the prior year.