The purpose of the Access to Information Act is to protect the public’s right to access records under the control of government institutions, while ensuring that the use of exemptions and exclusions is limited and specific. The Act also specifies that any decisions on the disclosure of information should be reviewed independently of government. To this end, the Office of the Information Commissioner (OIC) was established under the Act in 1983 as an independent oversight body reporting to Parliament.

When the OIC became subject to the Access to Information Act on April 1, 2007, the organization committed to providing exemplary service to requesters seeking information about its investigations and operations.

The OIC has consistently lived up to that commitment, quickly responding to requests and disclosing a broad range of information. As a further service to requesters, the OIC stopped charging any fees for making access requests in 2010.

This report, prepared and tabled in accordance with section 72 of the Access to Information Act, reviews the OIC’s access to information activities for 2017–2018.

The OIC is an independent public institution created in 1983 under the Access to Information Act. The OIC’s primary responsibility is to support the Information Commissioner of Canada’s mandate to conduct efficient, fair and confidential investigations into complaints about federal institutions’ handling of access to information requests. The OIC primarily uses mediation and persuasion to resolve complaints, but may bring cases to the Federal Court to ensure the Act is properly interpreted and applied.

Deputy Commissioner, Investigations and Governance, the OIC’s investigations group (Complaints Resolution and Compliance) mediates and investigates complaints about the processing of access to information requests and any issues related to requesting or obtaining access to records under the Act. Governance responsibilities are led by Corporate Services. This team provides strategic and corporate leadership for planning and reporting, human resources and financial management, security and administrative services, internal audit and evaluation, and information management and technology.

The OIC has a small team of specialists who carry out the organization’s access to information and privacy (ATIP) activities. In 2017–2018, the ATIP Secretariat comprised the ATIP Manager (full time) supported by ATIP Officer (full time).

In 2017–2018, the ATIP Manager provided training for the ATIP Officer, and Secretariat staff provided advice to individual OIC employees and managers on access matters, upon request.

Requesters who are of the view that the OIC has improperly handled their access request are entitled to file a complaint. To prevent any conflict of interest and to ensure the integrity of the complaint process, the independent Information Commissioner ad hoc investigates complaints regarding access requests submitted to the OIC.

Appendix C contains the OIC’s statistical report on the Access to Information Act for 2017–2018. The following sets out some highlights from that report, along with notable trends related to workload, timeliness and disclosure over the years the OIC has been subject to the Act. 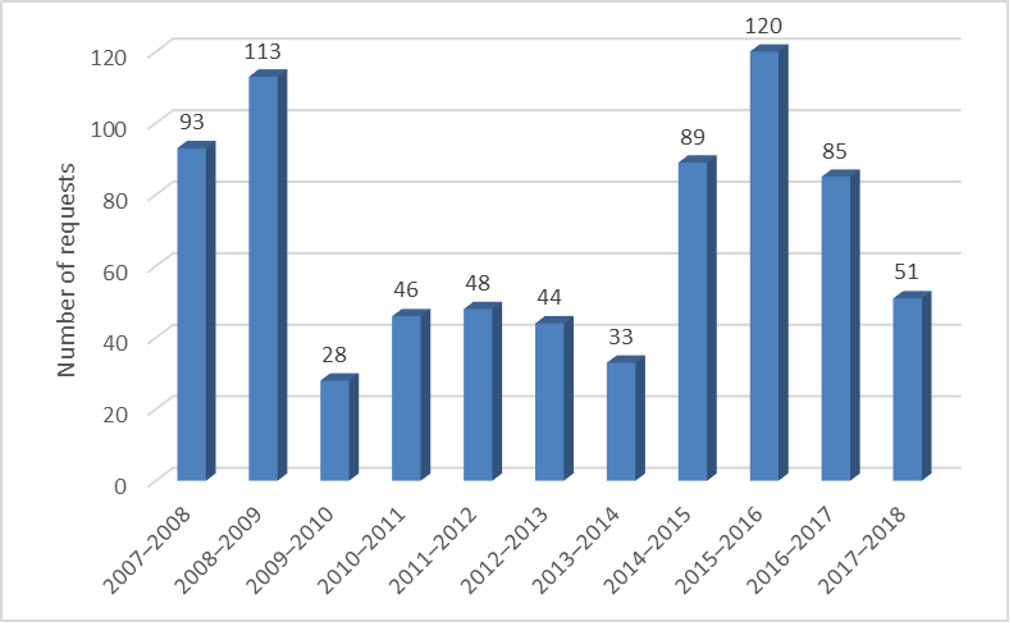 The greatest portion of the new requests in 2017–2018 were from members of the public (43 percent). Members of the media or businesses submitted nearly all the remaining requests. Receiving the majority of requests from the public is typical for the OIC, with the exception of the first two years the organization was subject to the Act when businesses were the source of most requests.

In 2017–2018, the majority of requests the OIC received were for administrative records, such as correspondence, briefing notes and statistics. The OIC also received a handful of requests about specific investigations being undertaken by the Information Commissioner. 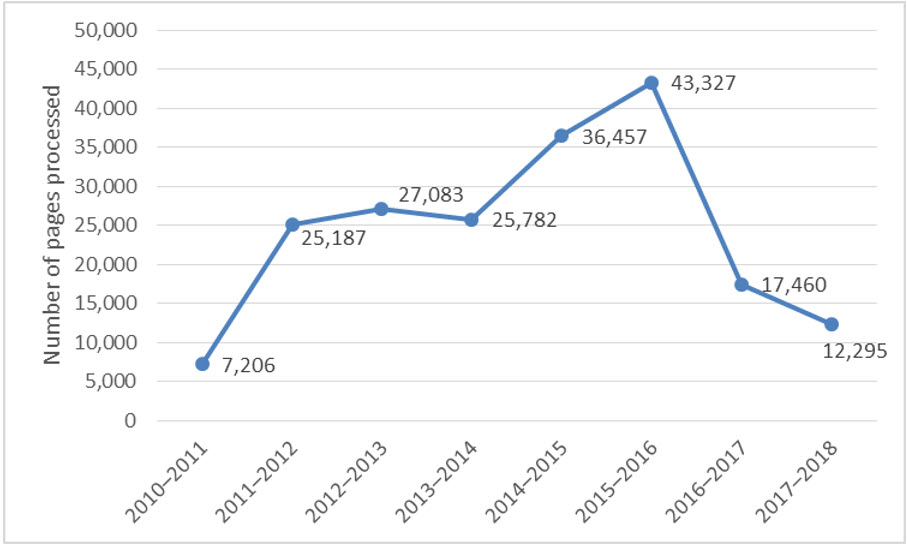 At the same time, three requests (6 percent of the total) each involved processing more than 1,000 pages each, consistent with recent years. More than half of the requests completed in 2017–2018 required the processing of fewer than 100 pages.

The final component of the OIC’s access request-related workload is consultations—that is, when other institutions seek the OIC’s input on requests they have received that touch on the OIC’s business or involve its records. Institutions generally ask for recommendations on whether any information should be exempted from release. The OIC’s general practice is to not provide recommendations on the application of exemptions in response to consultation requests. This is because the Information Commissioner could later be required to investigate complaints about the institution’s use of those provisions of the Act to withhold information. Not making recommendations allows the Information Commissioner to maintain impartiality and avoid conflicts of interest.

The OIC nonetheless received 16 such requests in 2017–2018, up slightly from the year before and responded to them all in 15 days or less.

A hallmark of exemplary service to requesters is timeliness. Indeed, responding to access requests as promptly as possible underpins the entire access system. 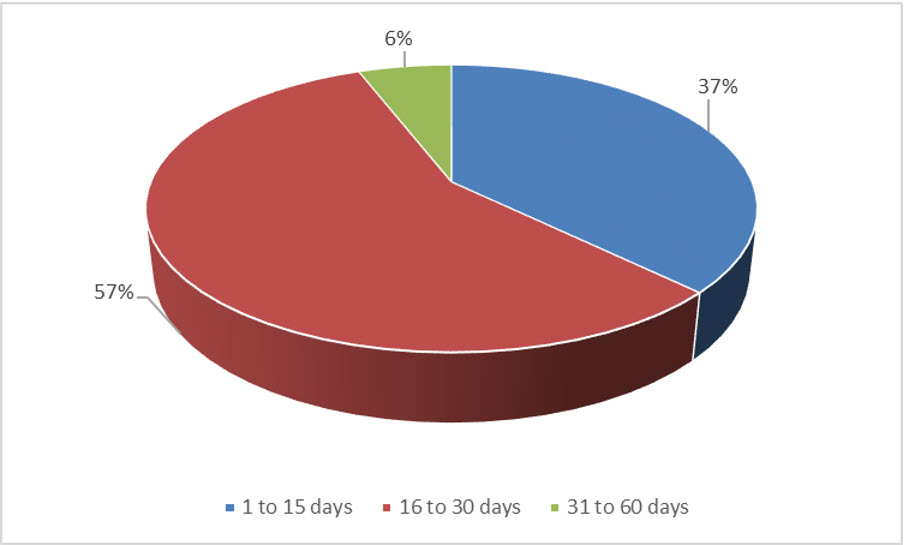 The Access to Information Act sets 30 days as the timeframe within which institutions should respond to requests. When institutions determine that they will be unable to complete a request in 30 days, they may take a time extension. In keeping with the principle of timeliness, the OIC strives to make these extensions as short as possible.

In 2017–2018, the OIC took three time extensions to respond to requests, all three for less than 30 days. Two of the extensions taken were for due to interference with operations, while the third extension was taken in order for the OIC to consult with other organisations.

The OIC completed all 51 requests it closed in 2016–2017 before their deadline (either 30 days or the extended date), such that the OIC had no “deemed refusals.” 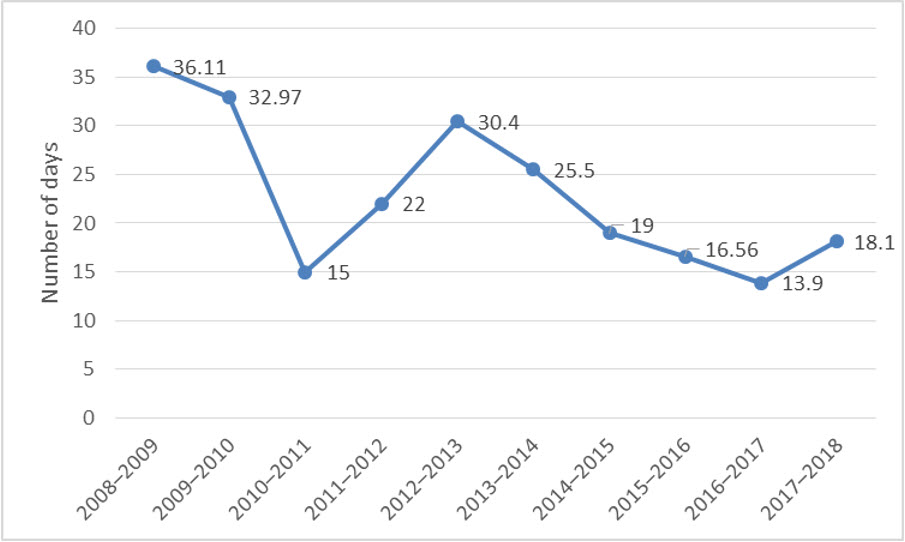 Another measure of timeliness is the average time it takes to complete a request.

*The percentages total slightly more than 100 due to rounding.

The purpose of the Access to Information Act is to protect the right to access records under the control of government institutions, while ensuring that the use of any exemptions and exclusions is limited and specific. In line with this purpose, the OIC seeks to release as much information as possible to requesters and withhold only what the law requires.

In 2017–2018, the OIC disclosed all the records in response to 11 requests (22 percent of the 51 files completed). These included requests for annual statistics, lists of briefing notes and routine procurement records.

The OIC released part of the information requested for 20 of 51 requests (39 percent). A number of these requests were related to investigations. The OIC may not release any investigation records before an investigation is complete and the complaint closed, and only some afterwards, as set out in section 16.1 of the Act. Figure 5 provides an 11-year trend. 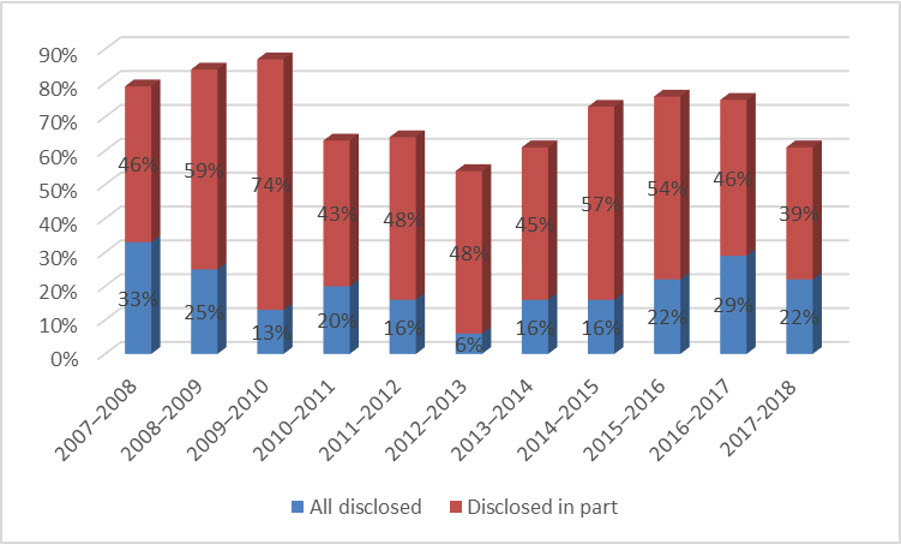 In 2017–2018, the OIC received eight new requests for which no records existed. This represents 16 percent of the total request volume, which is consistent with the proportion in the previous two years.

The OIC claimed four different exemptions and one exclusion to sever information when responding to requests in 2017–2018 over the 20 requests for which the records were disclosed in part.

The OIC invoked paragraph 16.1(1)(c) of the Act, which specifically exempts records associated with investigations, in 18 of the 20 requests. This is a mandatory exemption.

With the exception of 2008–2009, paragraph 16.1(1)(c) has been either the OIC’s most or second-most used exemption. Sections 19 (personal information) and 23 (solicitor-client privilege) are among the other most commonly claimed exemption. The OIC invoked section 19 in six requests and section 23 in eight requests, in 2017–2018.

The Act also excludes certain information, such as Cabinet confidences (section 69). The only exclusion the OIC invoked in 2017–2018 was pursuant to this section of the Act. 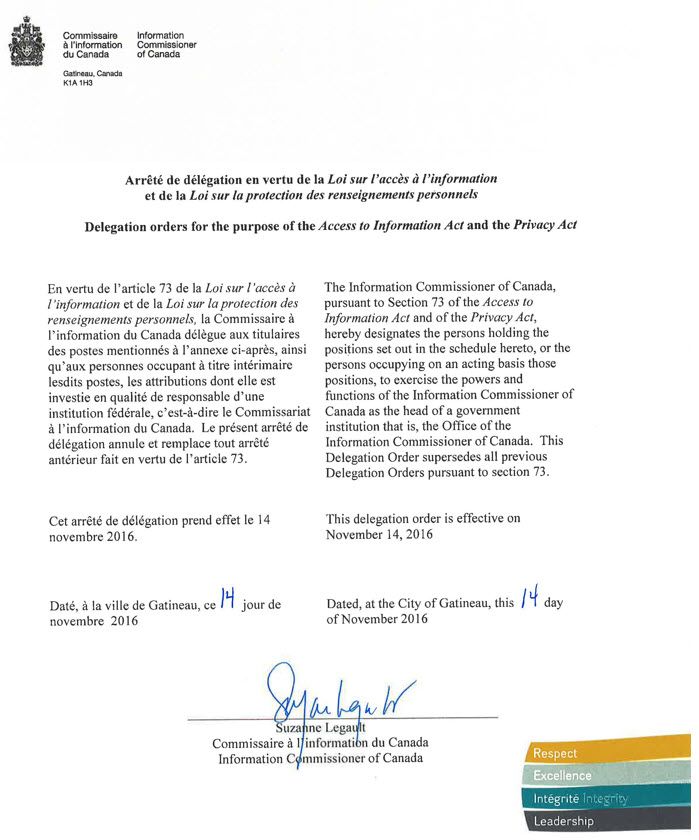 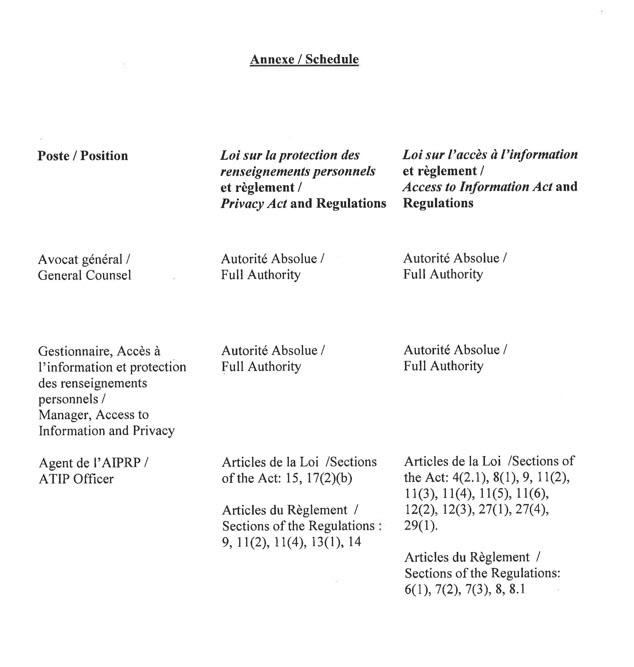 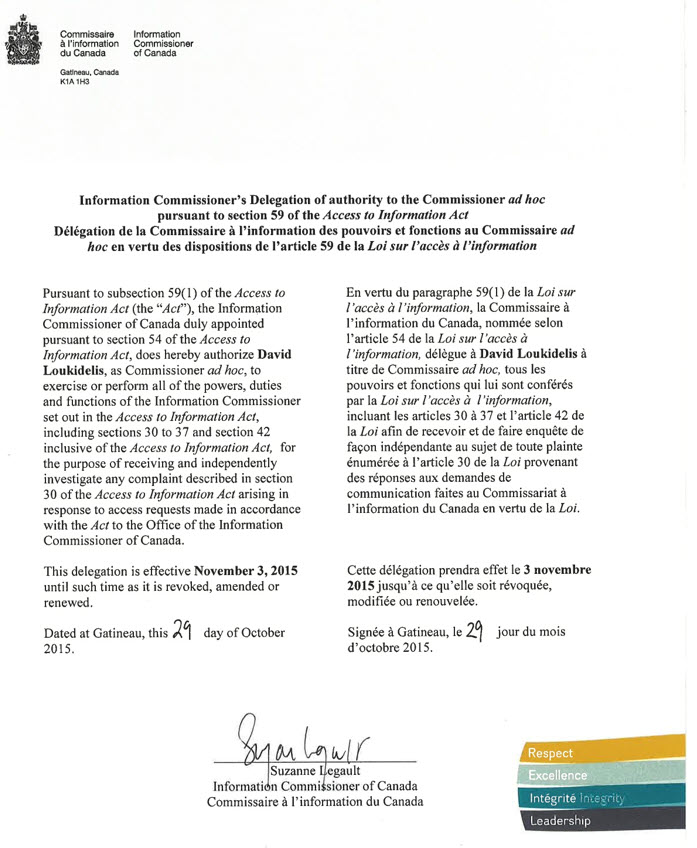 Note: All Requests previously recorded as “treated informally” will now be accounted for in this section only.

3.1  Reasons for Extensions and Disposition of Requests

Part 5: Consultations Received From Other Institutions and Organizations

5.1  Consultations Received From Other Government of Canada Institutions and Organizations

5.2  Recommendations and Completion Time for Consultations Received From Other Government of Canada Institutions

5.3  Recommendations and Completion Time for Consultations Received From Other Organizations

Part 9: Resources Related to the Access to Information Act