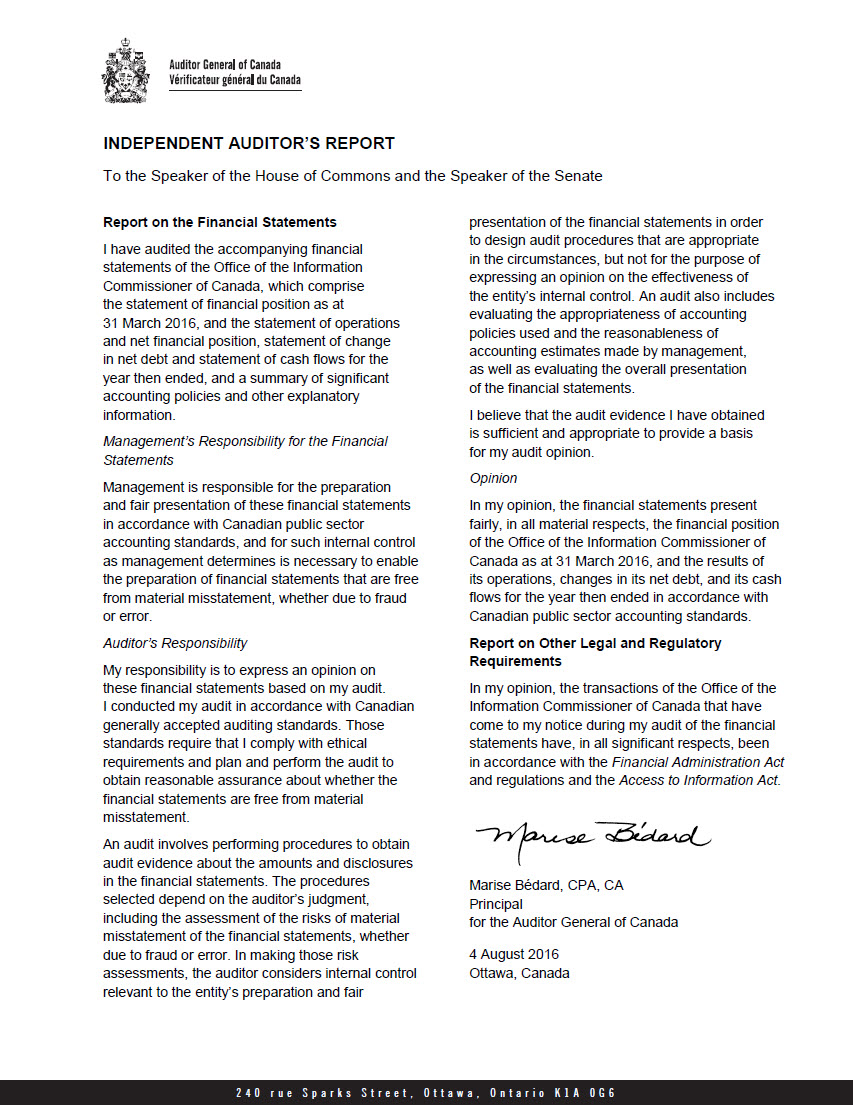 Responsibility for the integrity and objectivity of the accompanying financial statements for the year ended March 31, 2016 and all information contained in these statements rests with the management of the Office of the Information Commissioner of Canada (the “Office”). These financial statements have been prepared by management using the Government's accounting policies, which are based on Canadian public sector accounting standards.

A Risk-based assessment of the system of ICFR for the year ended March 31, 2016 was completed in accordance with the Treasury Board Policy on Internal Control and the results and action plans are summarized in the annex.

Compliance with access to information obligations: The Access to Information Act is the legislative authority for the oversight activities of the Information Commissioner which are: to investigate complaints from requestors; to review the performance of government institutions; to report the results of investigations/reviews and recommendations to complainants, government institutions, and Parliament; to pursue judicial enforcement; and to provide advice to Parliament on access to information matters.  The Office supports the Commissioner in carrying out these activities.

(d) Expenses – Expenses are recorded on the accrual basis:

The Office's employees participate in the public service pension plan (the “Plan”), which is sponsored and administered by the Government of Canada. Pension benefits accrue up to a maximum period of 35 years at a rate of 2 percent per year of pensionable service, times the average of the best five consecutive years of earnings. The benefits are integrated with Canada/Québec Pension Plan benefits and they are indexed to inflation.

9. Transfer of the transition payments for implementing salary payments in arrears

The Government of Canada implemented salary payments in arrears in 2014–2015. As a result, a one-time payment was issued to employees and will be recovered from them in the future. The transition to salary payments in arrears forms part of the transformation initiative that replaces the pay system and also streamlines and modernizes the pay processes. This change to the pay system had no impact on the expenses of the Office. However, it did result in the use of additional spending authorities by the Office. Prior to year end, the transition payments for implementing salary payments in arrears were transferred to a central administered account by Public Services and Procurement Canada, who is responsible for the administration of the Government pay system. No transition payments were incurred in 2015–2016 ($290,129 in 2014–2015).

Presentation by segment is based on the Office's program alignment architecture as described in Note 1. The presentation by segment is based on the same accounting policies as described in the Summary of significant accounting policies in Note 2. Direct expenses are charged to the relevant program with the exception of overhead related expenses which are allocated to the program based on a prorata basis based on full time equivalent per program. The following table presents the expenses incurred for the program, by major object of expenses. The segment results for the period are as follows: