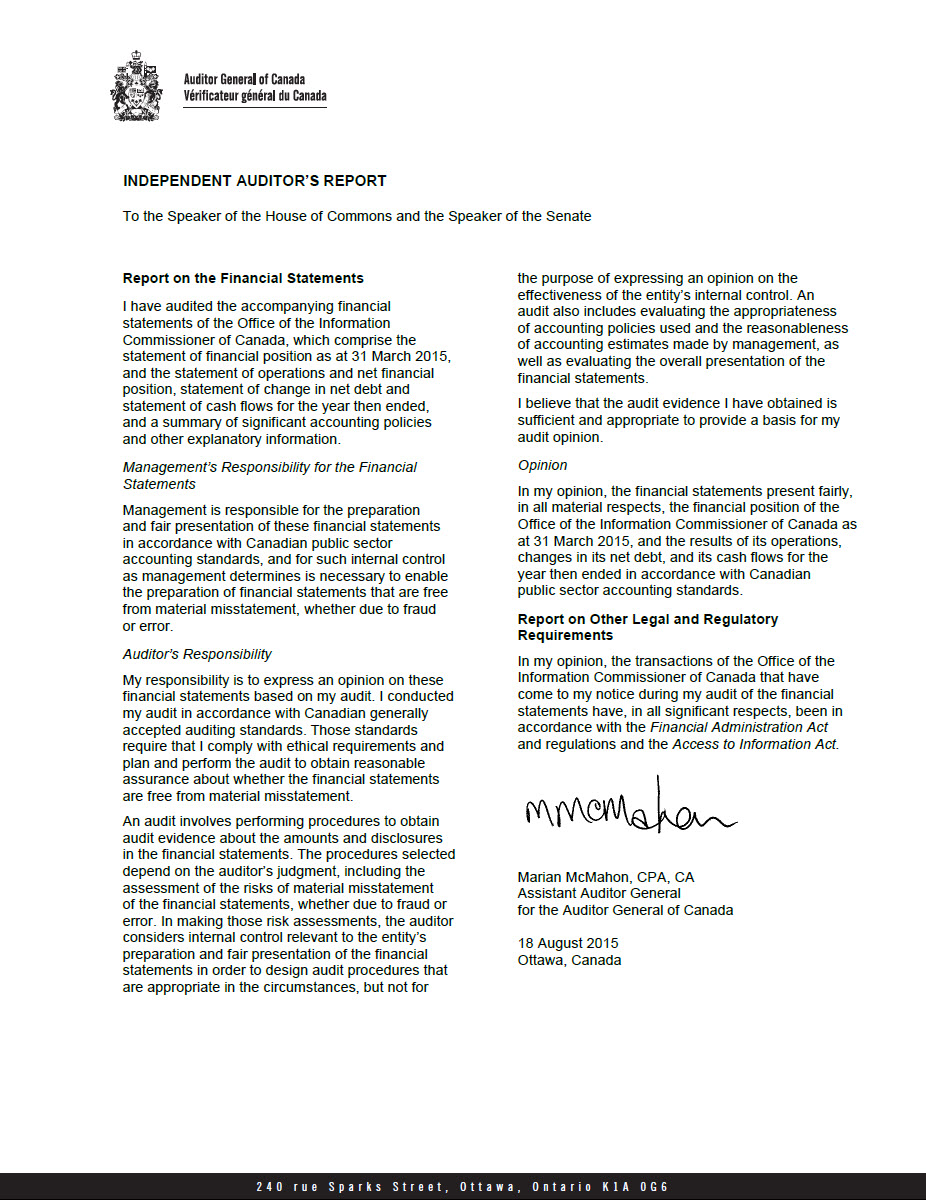 Responsibility for the integrity and objectivity of the accompanying financial statements for the year ended March 31, 2015 and all information contained in these statements rests with the management of the Office of the Information Commissioner of Canada (the “Office”). These financial statements have been prepared by management using the Government's accounting policies, which are based on Canadian public sector accounting standards.

A Risk-based assessment of the system of ICFR for the year ended March 31, 2015 was completed in accordance with the Treasury Board Policy on Internal Control and the results and action plans are summarized in the annex.

Each year, the Office of the Information Commissioner of Canada presents information on planned expenditures to Parliament through the tabling of Estimates publications. These estimates result in the introduction of supply bills (which, once passed into legislation, become appropriation acts) in accordance with the reporting cycle for government expenditures. The Office of the Information Commissioner of Canada exercises expenditure initiation processes such that unencumbered balances of budget allotments and appropriations are monitored and reported on a regular basis to help ensure sufficient authority remains for the entire period and appropriations are not exceeded.

(d) Expenses - Expenses are recorded on the accrual basis:

Credit risk is the risk that one party to a financial instrument will cause a financial loss for the other party by failing to discharge an obligation. The entity is not exposed to significant credit risk. The entity provides services to other government departments and agencies and to external parties in the normal course of business. Accounts receivable are due on demand. The majority of accounts receivable are due from other government of Canada departments and agencies where there is minimal potential risk of loss. The maximum exposure the entity has to credit risk equal to the carrying value of its accounts receivables.

The Office of the Information Commissioner of Canada's employees participate in the public service pension plan (the "Plan"), which is sponsored and administered by the Government of Canada. Pension benefits accrue up to a maximum period of 35 years at a rate of 2 percent per year of pensionable service, times the average of the best five consecutive years of earnings. The benefits are integrated with Canada/Québec Pension Plan benefits and they are indexed to inflation.

Both the employees and the Office contribute to the cost of the Plan. Due to the amendment of the Public Service Superannuation Act following the implementation of provisions related to Economic Action Plan 2012, employee contributors have been divided into two groups – Group 1 relates to existing plan members as of December 31, 2012 and Group 2 relates to members joining the Plan as of January  1, 2013. Each group has a distinct contribution rate.

(1) Disposals and Adjustments include an asset under construction of $87,417 that was transferred to computer software upon completion of the asset.

(1) Acquisitions of tangible capital assets relates to the Office’s mandatory relocation from 112 Kent, Ottawa to 30 Victoria, Gatineau in 2014.

9. Transfer of the transition payments for implementing salary payments in arrears

Presentation by segment is based on the Office's program alignment architecture as described in Note 1. The presentation by segment is based on the same accounting policies as described in the Summary of significant accounting policies in Note 2. Direct expenses are charged to the relevant program with the exception of overhead related expenses which are allocated to the program based on a prorata basis based on full time equivalent per program. The following table presents the expenses incurred for the program, by major object of expenses. The segment results for the period are as follows:

(1) Expenses for fiscal year 2014 are higher due to the costs related to the mandatory relocation to 30 Victoria in January 2014.

The Office has obligations arising in the normal course of operations for future years. These obligations relate to accommodation.