Public Health Agency of Canada's (PHAC) mandate is to promote and protect Canadians’ health by preventing and controlling chronic and infectious diseases and injuries as well as preparing for and responding to public health emergencies. PHAC also serves as a central point for sharing Canada’s public health expertise internationally.

PHAC processed 8 informal requests,Footnote 1 compared to 14 such requests in 2012–2013. According to PHAC’s annual report on the administration of the Act, the decrease observed in the number of informal requests received could be due to the fact that requestors sought multiple ATI packages in one request. 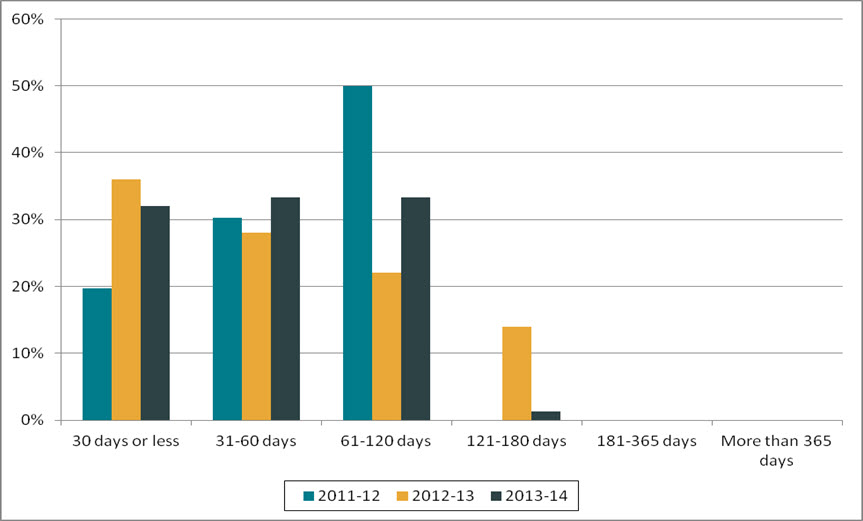 Extensions under 9(1)(a) (interference with operations) represented 40% of the extensions (or 30 requests) taken in 2013–2014 to deal with “to process voluminous records”. The Act provides that institutions may extend the 30-day time limit under this section to respond to a request if it is for a large number of records or necessitates a search through a large number of records and meeting the original time limit would unreasonably interfere with the operations of the institution. Based on the statistical report, only 3 requests were for more than 1,000 processed pages.Footnote 4

An additional 36% of extensions were taken for consultations (9(1)(b)).

Most of the pages processed were disclosed (94%), a significant improvement compared to 2012–2013, when the proportion was of 25.1%. Of note, 94.3% of responses were provided in paper format. Only 5 requests were responded to in electronic format.

In 2013–2014, PHAC initiated a new shared services model with Health Canada, in order to harmonize the ATIP processes between the two institutions. It also lead to the implementation of a single ATIP coordinator model for both institutions. PHAC mentioned that the model is “fully compliant with legislative requirements, and involves the cross-appointment of select delegated authorities to both institutions.”Footnote 5

PHAC also worked to enhance and stabilize the ATIP office by hiring more full-time employees instead of temporary help consultants. As such, competitive staffing processes were completed during 2013–2014 and were planned to continue through 2014–2015.

A majority of them were also well founded (8). One complaint was not well-founded and 1 was settled. As of April 2015, 3 complaints were still pending.

Based on response to parliamentary written question Q-485.

The OIC’s Advisory Notice on Time Extensions Pursuant to Paragraph 9(1)(a)of the Access to Information Act indicates that the OIC normally considers 1,000 pages of records or more as a benchmark for what constitutes a large number.