The majority of requests were from the media (62%). This represents an important increase compared to the 2013–2014 reporting period, where 39% of the requestors were members of the media. Other significant sources of requests this year included members of the public (14%) and businesses (13%).

Compared to government-wide statistics, IC processed by far the highest number of pages per request in 2013–2014 (9,631 pages/request completed compared to 5,050 pages/request completed in 2012–2013). The government-wide average was 258 pages per request in 2013–2014. However, the high volume of pages processed (5.2 million) was attributed to a small number of requests, as 5,000,000 of the pages processed were related to only 17 requests. As such, most of the requests completed required the processing of less than 100 pages (79.6%).

The proportion of requests closed past the statutory deadline in 2013–2014 was 5.32%. This represents a “B” grade,Footnote 4 which is a significant improvement compared to the deemed refusal rate achieved in 2012–2013 (15.1%). The vast majority of these late requests had been extended.

Workload was reported as the principal reason why statutory deadlines could not be met, representing about 65% of the 46 requests closed past statutory or extended deadlines in 2013–2014.

A total of 466 extensions were taken in 2013–2014, an average of 0.54 extension per request completed. In comparison, this proportion was 0.34 during the last reporting period. This means that IC took proportionally significantly more extensions to complete requests in 2013–2014 than in 2012–2013. 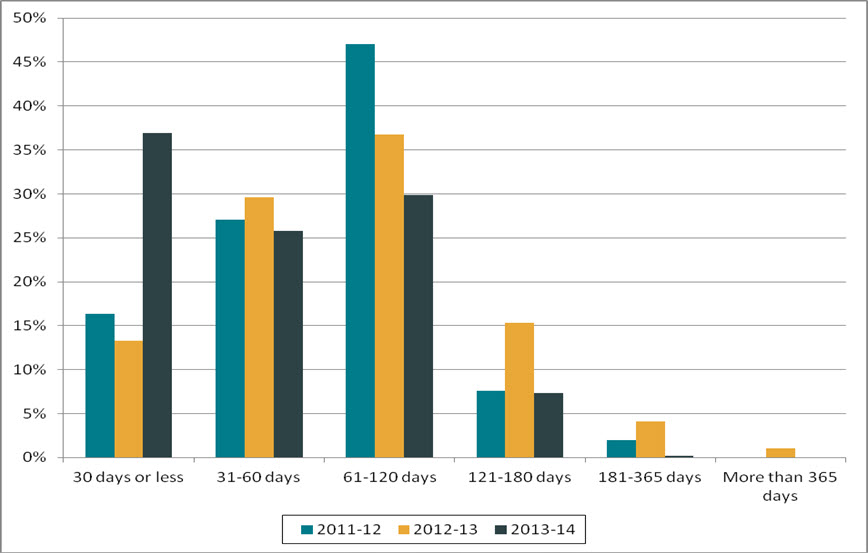 The IC’s ATIP team reviewed its practices in order to streamline processes and improve the overall administration of the access to information requests received under the Act. According to the annual report, this process allowed IC to identify and eliminate redundant elements, which would expectedly have a positive impact on IC’s performance.

As for the disposition of the complaints received in 2013–2014, 10 of them were discontinued, 9 were well founded, 3 settled and 2 not well-founded. The remaining 18 complaints were still pending as of April 2015.

A review of the summaries of completed ATI requests online via the www.open.canada.ca website revealed that themes of requested information included: information regarding the wireless industry (Rogers, Videotron, Verizon and other companies), documents prepared for the new minister following the July Cabinet shuffle, briefing notes on meetings with various companies, and information on General Motors of Canada Limited.

This increase seems to be the result of the inclusion of informal requests for previously released information in the calculation of the total number of access requests received in 2013–2014 under “treated informally” (as per table in the statistical report, IC received 235 such requests). Based on the TBS’s guide, requests that are treated informally are formal requests that have been discontinued for an informal treatment. The inclusion of these requests in the calculation impacts the overall performance indicators of the institution.