Canada Revenue Agency (CRA) administers tax laws for the Government of Canada and for most of the provinces and territories. It also administers various social and economic benefit and incentive programs delivered through the tax system.

CRA’s performance in 2013–2014 was similar to that of the previous year, but remained below government-wide results.

Additionally, CRA improved the proportion of requests closed past their statutory or extended deadline this reporting period, from 14.5% in 2012–2013 to 11.8% in 2013–2014. This proportion represents a “C” grade.Footnote 2 However, 235 late requests (or 71.4%) had already been extended. Furthermore, 21 of these late requests took an additional year to be answered. CRA noted in its annual report that it continues to strive toward its goal of closing all requests by its statutory or extended deadline. The high volume of pages to process had a direct impact on CRA’s ability to achieve this goal. 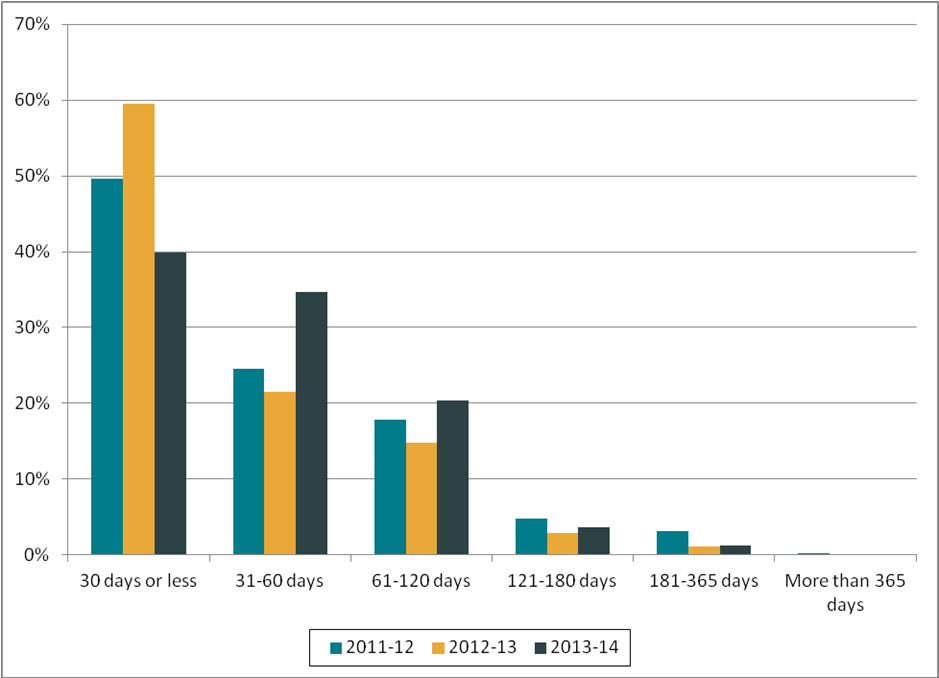 During Right to Know Week, CRA organized an online forum for CRA’s employees. They were invited to suggest ways in which CRA could increase and improve the proactive disclosure of its information to the public.

Since a significant amount of access requests are related to CRA’s procedure manuals, CRA’s ATIP office has prepared a virtual library project which, if approved, could be implemented in 2014–2015. The release of these manuals on CRA’s website could help reduce the number of formal access requests to be processed by CRA. This would also support CRA’s objective to release more information informally and follows the Information Commissioner’s recommendation.

A dashboard report that provides information about the current state of all ATIP requests is produced by CRA’s ATIP office on a monthly basis. This report is use to monitor, among other things, the timeliness of each process (intake, search, etc.) and to measure the ATIP office’s performance. The Assistant Commissioner (Public Affairs Branch) is also regularly informed about it.

As for the disposition of complaints registered in 2013–2014, 76 were well founded, 27 were not well-founded and 2 were settled. An additional 78 complaints were discontinued and 100 were still pending, as of April 2015.