How do target countries meet the obligations imposed by their respective access to information laws with regard to international relations? Using this question as a framework, the next section provides a systematic comparison of procedures DFAIT developed since the 1982 legislation came into effect and the issue of a Treasury Board Secretariat directive on consultations.

This section provides an overview of legislative provisions and regulations that frame the handling of access requests likely to affect international relations in the five countries, followed by an examination of their consultation practices.

The first exemption mentioned in the 1966 Act provides for the exclusion of documents relating to national security and foreign policy (Section 7, b, 1, A). The exemption is based on the security level attributed to this type of document and has been the subject of a great number of court rulings.

The concept of consultations is not specifically mentioned in the wording of the law; it is inferred from a logical interpretation of the first exemption. Similarly, there is no procedure or regulation that requires other government entities to consult the State Department or even direct to that department any access requests that might impact U.S. international relations.

No procedures have been established requiring other departments or agencies to direct requests to the Department of Foreign Affairs and Trade (DFAT). Neither is there any requirement to consult with that department when a requested document has an impact on Australia’s foreign relations.

The Ombudsman – or any other government entity – has not issued directives to other departments or agencies regarding the handling of access to information requests that might impact New Zealand’s international relations. There is no obligation to consult the Ministry of Foreign Affairs and Trade (MFAT).

Similarly to legislation enacted in most of the other countries, the United Kingdom’s 2000 legislation (s. 27) stipulates that access to certain documents relating to international relations and national security may be refused.

An important provision of the legislation states that a minister may sign a certificate that “establishes” the existence of possible damage if a particular document were to be published, therefore restricting access and preventing the Commissioner from intervening.

Government departments and agencies who receive access requests governed by section 27 do not have a formal obligation to direct them to the Foreign and Commonwealth Office. However, in a recent note, the Ministry of Justice encouraged those entities to solicit an opinion before directly consulting with another government or international organization.Footnote 23

There is no particular provision in the legislation that deals with exemptions relating to international relations issues. The question of foreign consultations is not mentioned in guidelines published by IFAI, or by any other government entity.

Legal provisions and the regulatory context in place in each of the five countries compared provide a backdrop for the manner in which each country engages in consultations with foreign governments and international organizations.

In the U.S., most consultations with foreign governments and international organizations are conducted by the State Department. That practice stems from that government department’s experience on the subject and the complexity or sensitivity of the documents targeted by such an action.

Other government departments and entities also directly consult their foreign counterparts on occasion – nothing prevents them from doing so. It is up to officials responsible for access to information in each department or agency to decide whether they solicit State Department services and advice before taking action. For reasons of efficiency, such officials generally have considerable leeway in initiating foreign consultations.

On the other hand, the Department also receives a number of consultation requests from foreign governments, Canada ranking first in that regard.Footnote 24

The Department of Foreign Affairs and Trade (DFAT) generates a certain number of consultations with foreign governments and international organizations.

In other government departments and agencies, the decision on whether to consult Foreign Affairs regarding a specific request rests with the official responsible for access to information, with no other obligation than the exercise of prudence. In most cases, such departments and agencies communicate directly with their foreign counterparts.

Foreign consultations conducted or received by Foreign Affairs totalled 30 during 2008–09. Of that number, about ten came from the U.S., the United Kingdom and Canada.

The Ministry of Foreign Affairs and Trade (MFAT) may, on occasion, engage in foreign consultations despite there being nothing in the legislation or regulatory wording that compels them to do so. The decision is made according to the perceived need for such an approach or for reasons of diplomacy.

There being no formal requirement to do so, the unit responsible for the FOIA in the Foreign and Commonwealth Office engages in few consultations with foreign governments and international organizations. Such consultations take place only if the Department agrees to release the document and wishes to obtain, for diplomatic reasons, the agreement of the foreign government concerned.

The Foreign Office opts in favour of efficiency in its consultations in the express hope that FOIA deadlines will be met. It will therefore intervene directly with the foreign country’s embassy or high commission in London or use traditional diplomatic channels through its diplomatic mission in the country concerned by the request.

Similarly, some government departments and agencies engage in this type of consultation when deemed appropriate. In respect of “good practices” favoured by the Ministry of Justice, they occasionally request an opinion of the Foreign and Commonwealth Office.

Since the FOIA became effective in 2005, foreign consultations have been few; conversely, the Ministry receives a limited number of consultation requests from foreign governments.

In Mexico, consultations with foreign governments or international organizations are infrequent. While the legislation does not require it, prudence may occasionally bring the Secretaria de Relaciones Exteriores (SRE) to engage in such an initiative.

Other units of the federal government may also approach their usual contacts regarding access requests that concern them. For its part, the SRE does not get involved unless the document in question or its content directly concern the Department’s mandate.

The number of foreign consultations is very small and the SRE receives few consultation requests from foreign countries or international organizations.

In short, because there are no provisions in their respective access to information legislation that specifically refer to foreign consultations, all five countries in this comparison study follow similar procedures. In each case, the government department or agency that receives an access request that may impact international relations directly contacts the foreign counterpart concerned by the request (Figure 2). This procedure does not exclude the possibility that the foreign affairs department will be consulted beforehand. 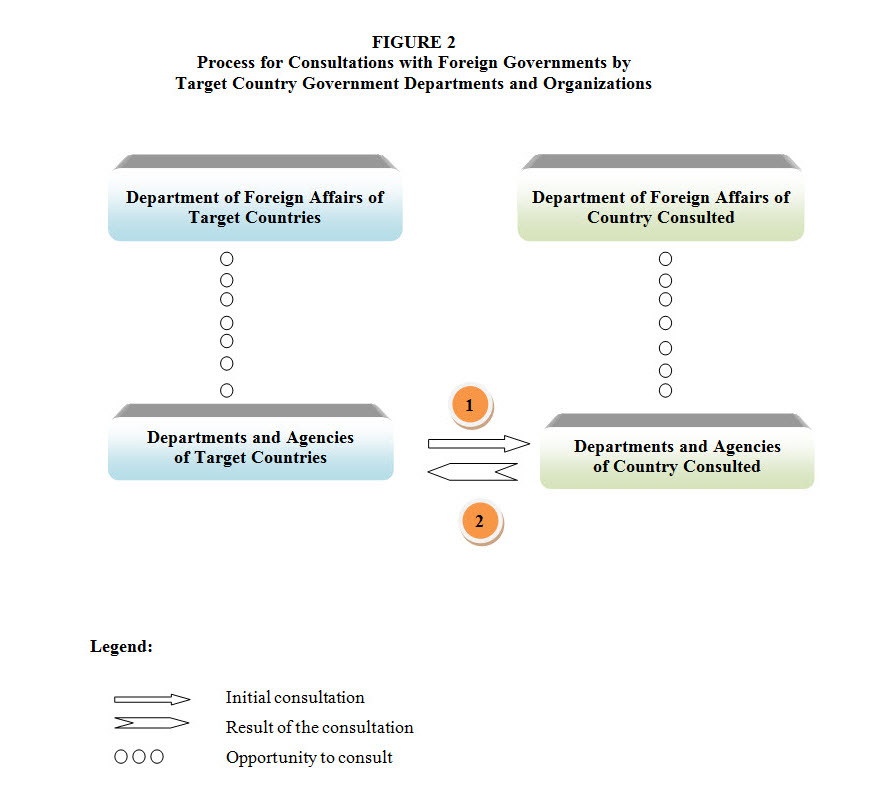 In 2008, DFAIT generated 77 of the 101 requests for consultation received by the State Department. In 2009, this proportion grew further: out of a total of 206 consultations, 172 came from Ottawa.