The issue of consultations with foreign governments involves legal considerations and regulatory requirements. It is also coupled with administrative procedures, which ultimately give it a particular role in the access to information system as it is structured in Canada.

In virtually all access to information legislation, special treatment is given to requests for documents potentially impacting on the country’s international relations. Canada is not immune to what is almost a rule. The object of the provisions established to that end is the maintenance of harmonious relations between countries and with international organizations. Questions of national security are also part of this concern.

In the legislation of 1982, provisions governing international relations, in the broad sense, are relatively well circumscribed. All documents communicated or entrusted to the Government of Canada by another government or an international organization are subject to an imperative exemption: they cannot be disclosed to a requester unless the government or organization in question explicitly consents to the disclosure (section 13). The government has discretionary authority as regards documents pertaining to issues of defence, national security, diplomatic correspondence with another country and international negotiations (section 15).

Parliament enacted a special procedure for reviews of decisions given under either of those two sections. In specifying (section 52) that the Chief Justice of the Federal Court may hear such applications for reviews, Parliament, in a way, is affirming the exceptional nature of these kinds of documents. The conditions for action by the Information Commissioner when called upon to investigate a complaint of that nature must be interpreted in exactly the same manner (section 59(2)).

It can no doubt be affirmed that the notion of consultation is implicit in the provision that allows the government – in fact, DFAIT – to disclose certain documents when consent has been given by the foreign country or international organization. The Department has developed an entire set of procedures to deal with this aspect of processing access requests made directly to it.

The consultation system, which is exactly what is at issue, has in fact been expanded under a regulation issued by the Treasury Board Secretariat more than 17 years ago.Footnote 13 Under that regulation, any department or agency that receives an access request concerning any aspect of international relations must defer to DFAIT. This department alone has the authority to decide whether to take steps in that regard with another government or international organization. That prerogative was also clearly reaffirmed by the Department following a request from the Department of National Defence, which, in 1997, wanted to deal directly with its counterpart in the United States.Footnote 14

DFAIT does not initiate foreign consultations until it has conducted a detailed review of requests for documents whose impact on Canada’s international relations is considered a serious possibility. These files are therefore screened according to very specific criteria that are codified in procedures followed by staff of the Access to Information and Privacy Protection Division.Footnote 15 Consequently, DFAIT does not consult certain governments on account of the presumptive attitude of these countries.Footnote 16

DFAIT engages in foreign consultations in respect not only of access to information requests made directly to it, but also of requests from other departments and agencies. Conversely, it is approached by foreign governments that also have access to information structures containing provisions governing the status of international relations.

In fact, the foreign consultations process is coupled with another obligation that DFAIT must fulfil under the same Treasury Board Secretariat directive, but this time with regard to the Privacy Act.Footnote 17 Acting under the same objective, i.e., maintaining harmonious relations with other countries and/or international organizations, the Department can therefore decide to initiate foreign consultations in respect of personal information. This procedure applies not only to requests for personal information made to the Department, but also to files from other departments and agencies.

This process is relatively complex. It involves a significant number of players whose actions correspond in fact to the different stages in the consultation process. It can be illustrated as follows (Figure 1). 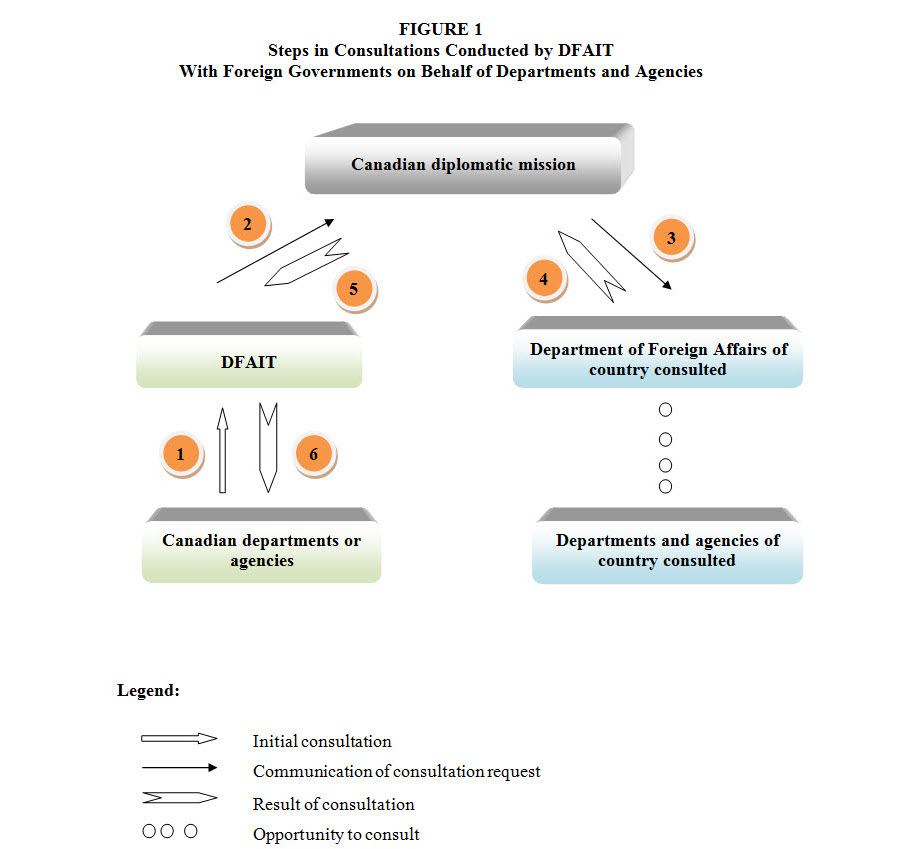 Internal memorandum signed on December 22, 1997, by Michael C. Welsh, Director, U.S. General Relations Division. “We believe that this proposal would significantly erode DFAIT’s responsibility for pursuing, on behalf of all government departments, consultation with the U.S. prior to the release of documents which could be expected to be injurious to the conduct of international relations.”

“Some foreign governments, such as China, India, Korea and perhaps others, may object to being consulted on their records. They consider that the information was given in confidence and should remain confidential.” Internal DFAIT document. Reference document: Annex H, Copy of study conducted re: sections 13 and 15.