Before this study was launched, the following question set the stage for a comparative look at how five countries handle consultations with foreign governments and international organizations. Can avenues be identified to help DFAIT improve its process?

Two points need to be made before responding to the question.

First, it should be noted that this research concerns only foreign consultations; it sets aside other initiatives grouped under the same label that may be undertaken by any of the Department’s directorates, including the Access to Information Branch. Such internal initiatives may, or may not, end up being included in the foreign consultation process.

Secondly, it is also important to keep in mind the very specific character of these consultations, which are part of the dialogue between countries, as well as the fact that they necessarily rely on diplomatic practices and style. As such, diplomats must think twice before following up with the foreign affairs department of the host country regarding a case that is languishing.

This structured study of the processes and procedures used by the five reference countries results in two proposed avenues to consider in order to alleviate the problem DFAIT has been facing over the past several years.

(1) The first avenue concerns the technical side of the consultation process, once the principle of such an initiative has been established by DFAIT. Similarly to what is done by other foreign affairs departments, consultation officials at DFAIT, in cooperation with their foreign missions, should identify the best gateway for soliciting consultations with other countries. Are normal channels through the foreign affairs department of the country concerned always preferable? In some cases, the answer is clear given traditional practices and the reciprocity that has developed in this very specialized dialogue.

Otherwise, would it not be more efficient to direct such requests through the country’s embassy located in the nation’s capital? The question warrants consideration in the case of countries to which access requests have yet to be directed or which have received very few such requests in recent years. Such an approach could enhance relations between DFAIT and the embassies in question and may even produce unexpected dividends.

On a more basic level, the Department would also gain by expediting document handling procedures, using its missions to direct consultation requests to foreign affairs departments of the country concerned. To reduce delays and depending on the destination, the possibility of sending documents by the fastest and most frequent diplomatic pouch should be examined. That would be a clear demonstration of DFAIT’s interest in this aspect of diplomatic duties.

Given the ever-increasing volume of reciprocal access to information consultations between Ottawa and Washington, it might be useful to streamline procedures currently in place. Access to information officials at the State Department and at DFAIT would benefit from initiating discussions in that regard.

(2) The second avenue to explore involves a more thorough examination of DFAIT practices over the past twenty years and the principles underlying consultations with foreign governments. The Department of Foreign Affairs and International Trade is solely responsible for engaging in consultations with foreign governments and international organizations. Traditional diplomatic practices and the mandate conferred by the Treasury Board Secretariat regarding consultations have solidly anchored this way of doing things.

In light of information gathered from practices in four of the countries in this comparative study, this issue warrants review. Similarly, increased specialization in various spheres of international relations – including access to information – provides a basis to question what was yesterday considered a certainty. Globalization does not only concern trade and the economy; it involves a great number of stakeholders who turn the wheels of international life at various levels.

It might therefore be useful to allow some departments or agencies to initiate foreign consultations under pre-determined conditions. Particularly concerned would be departments that maintain significant and sustained contact with foreign counterparts in government departments or international organizations through well-established ties and in accordance to procedures.

Such streamlining would in fact match one of the options considered some time ago by the Treasury Board Secretariat with regard to such initiatives by very specific entities: “Only when an established and acceptable system of liaison and consultation already exists should direct consultation take place. External Affairs should be kept informed of these channels of consultation.”Footnote 28 The Ministry of Justice in the United Kingdom, which plays a similar role to that of the Treasury Board Secretariat with regard to access to information, has adopted the same principle by publishing its “guidance” on international relations issues.Footnote 29

A two-tier procedure might be considered for a department or agency to directly engage in consultations. It should first establish for DFAIT the nature and strength of the ties maintained with its foreign counterparts. When an access request is received, the department or agency could provide DFAIT with the wording of the proposed foreign consultation and the rationale behind the anticipated decision. DFAIT would then have ten working days to issue its comments and suggestions, or even an outright refusal. (Figure 3). 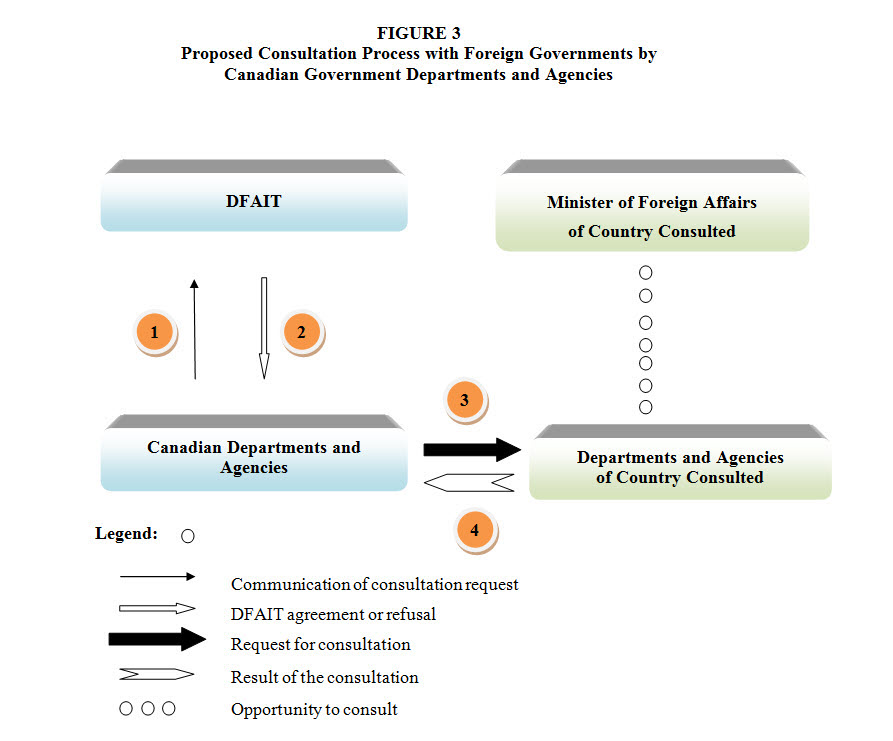 This procedure preserves DFAIT’s right to ultimately review requests and borrows from practices in four of the five countries studied in this comparison. Such an approach would streamline the consultation process and avoid delays incurred when documents are sent back and forth between foreign affairs departments in the two countries concerned. It would also considerably shorten lengthy delays under the current system, therefore reducing departmental and agency grumbling about DFAIT.

This discussion should involve both DFAIT and the Treasury Board Secretariat in view of the latter’s responsibilities relating to Access to Information Act implementation.

The Information Commissioner should also be involved in weighing these options due to their international dimension. She could consider calling on her counterpart commissioners in other countries to study this issue and, in so doing, possibly jumpstart the move towards a common framework that would harmonize and streamline foreign consultations.

These proposals do not affect internal DFAIT procedures. Reviewing various aspects of a request for access (sent directly to DFAIT or through a department or agency) that impacts Canada’s international relations constitutes a considerable burden for DFAIT.

Again, these avenues and suggestions concern only the international dimension of consultations initiated on behalf of federal government departments and agencies. They could result in measures that lighten DFAIT’s burden related to determining the impact that a request for access could have on Canada’s international relations. Finally, such streamlining would no doubt enable departments and agencies to respond more quickly to requests for access to documents that may have international ramifications.

The overarching goal of these possible steps is to ensure that citizens have access to requested documents within a reasonable amount of time and in accordance with the provisions and spirit of the 1982 Act. The proposed options are in keeping with the objectives expressed by the Department in its response to the report published by the Information Commissioner a few months ago.

Ministry of Justice (2008). Freedom of Information Guidance – Exemptions Guidance – Section 27: International Relations, London, 14 May, page 11: “The advice of FCO officials should normally be sought before you consult foreign governments or international organizations about the disclosure of information, although on subjects where other public authorities have well-established international relationships it may be sufficient to keep FCO officials informed.”